Visit of Ms Věra Jourová, Vice-President of the European Commission, in the context of the dialogue on the rule of law between the Commission and EU Member States

In the context of the visit to Romania of Mrs Věra Jourová, Vice-President of the European Commission, in the framework of the dialogue on the rule of law between the Commission and the Member States, the Minister of Justice, Cătălin PREDOIU, had a bilateral discussion on current issues concerning the judiciary reform and the fight against corruption. Topics of interest for the European agenda were also discussed, namely the state of play of the draft law transposing the Directive on the protection of whistleblowers, measures to support, at national level, the European Public Prosecutor’s Office and support for the draft directive on the protection of persons involved in actions of public mobilisation against manifestly unfounded or abusive legal proceedings (SLAPP), recently adopted by the European Commission.

The Minister of Justice underlined the need for urgent amendments to the justice laws in order to respond to the European Commission’s recommendations in the context of the CVM, as this is the biggest project to revise the legal framework on the organisation and functioning of the judiciary. In parallel, the draft laws bringing the Criminal Code and the Criminal Procedure Code in line with the decisions of the Constitutional Court are being finalised. These are the two major projects that need to be adopted by Parliament by the end of this year, as they are also RRP milestones.

On the assessment of the Law 49/2022 on SIIJ dismantling implementation, the Minister of Justice noted that 39 delegated prosecutors out of the 40 proposed by the SCM have already been appointed, following the completion of the first selection procedure. A second selection procedure for special prosecutors for the central structure is under way. It should be mentioned that all 6774 SIIJ cases have been redistributed to the General Prosecutor’s Office and the prosecutors’ offices of the courts of appeal.

The European Public Prosecutor’s Office is the European institution strongly supported by Romania since the negotiation stage of the Regulation establishing it. Currently, 9 delegated European Prosecutors are working at central and local level, and last week the 4th procedure was completed, with 2 more prosecutors selected.  The EPPO will soon have an office in Bucharest.

It was agreed to continue cooperation to support Romania in fulfilling its commitments. 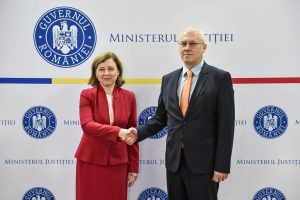